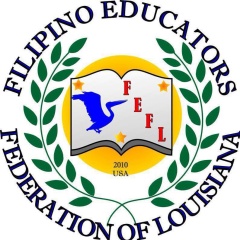 The Filipino Educators Federation of Louisiana (FEFL) is a non-profit organization of teachers from the Philippines, who are working in the different districts of Louisiana.[1] FEFL addresses causes that serve educators, students, and the community. [2]

The organization formed in 2010 to defend against the exploitation of Universal Placement International (UPI), the agency that recruited teachers for jobs in Baton Rouge. FEFL worked with the teachers' unions and with a group of Lawyers from Southern Poverty Law Center to protect the teachers from the abuses of the agency owners. [2] The agency charged the teachers fees far above what is legally allowed and required them to sign contracts that illegally bound them to pay the company 20% of their first year salary and 10% for the remainder of their contract. [3]

[4] FEFL filed a law suit against UPI and was awarded 4.5 million dollars to pay back some of the money paid by over 300 teachers. UPI declared bankruptcy and the teachers were not able to recoup their losses. [2]

The United States Citizenship and Immigration Services declared the teachers victims of human trafficking and awarded all the teachers named in the suit humanitarian visas, or T visas. The T visa allowed them to remain in the United States for four years and after three years to apply for permanent residence status without the support of an employer or sponsor.

A number of FEFL members hold permanent residency status. No longer just a temporary solution for a teaching shortage, they have become entrenched in their jobs and the community. Many FEFL teachers have been named "Teacher of the Year." Many have gone on to get post-graduate degrees. [2]

FEFL supports the work of the Filipino Consular in Louisiana, hosting events that allow the Filipino community to avail of consular services without having to travel to the nearest Philippine Embassy in Chicago. FEFL has hosted regular consular outreach events since 2011. In 2016, the grouped set-up a voting station for the Philippine National Election.[2]