Saint Malo was a small fishing village in St. Bernard Parish on the shore of Lake Borgne near Shell Beach. The village was built in the mid-18th century and occupied into the early 20th century, when it was destroyed by a hurricane.

The fishing village and the Shell Beach area were home to many Filipinos, including the first Filipinos to settle in the United States. Lafcadio Hearn famously described St. Malo as a "strange settlement of Malay fishermen--Tagalas from the Philippine Islands." [1] 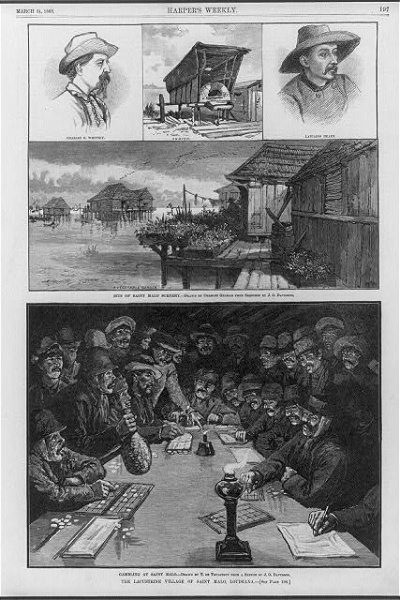 From the late 1700's through the 1800's, Filipino sailors settled on the island of St. Malo and around the Shell Beach area. These sailors were commonly referred to as Manilamen or Malays. Lafcadio Hearn described St. Malo as a community inhabited primarily by Filipino men who he describes as "mostly cinnamon-colored men" with a few "glossily yellow," some with eyes "set slightly aslant," all with black hair. To Hearn the men represent the "varieties of the Malay race." [1]

In 1883, Del Carpio at 80 years old was the oldest man on St. Malo. He arrived at St. Malo around 1848 at the age of 45. He had been a sailor on one of the many ships that dock in Louisiana. He found his way to St. Malo. and settled to make a living as a fisherman. [2] We can surmise that Carpio had heard about St. Malo before he ventured out into the distant swamp. We will never know whether he heard about the settlement from letters, through informal network of sailors, or at the docks.

Despite their isolation in the swamp, the residents of St. Malo had a communication network that allowed them to send money and letters to family and friends. The sailors would have been familiar with the trade routes of the Gulf of Mexico, Caribbean and the Pacific. It is not difficult to imagine that they could negotiate with other sailors to deliver their messages to the Philippines. Perhaps Carpio could have been part of the process, as he spend a part of each year to Mexico to play cards. [1]

Hilario, "El Maestro," was considered the leader of the village. His home was called the gambling den, and he hosted card games when the weather didn't allow the men to fish. Hilaro raised fighting cocks and dried fish. Hearn describes him as the only "white man" in the settlement.

Thomas De Los Santos married a white woman and had two children, Valentine and Winnie. Valentine went to school in New Orleans and secured a job with a judge. He gave up the job to return to St. Malo and the life of a fisherman. He was the best piroque oarsman in the village. 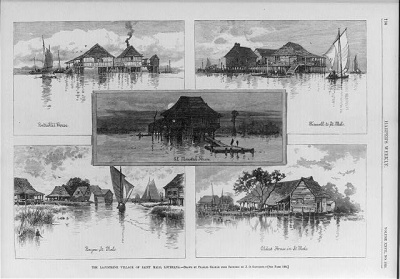 The 1880 census of the 7th ward of St. Bernard covered Shell Beach and St. Malo. The absence of all of the proprietors in St. Malo suggests that the census taker didn't make it out to the island. The 7th ward census lists six dwellings with Filipino residents. Two of the dwellings were single-occupant. Three housed families. Two of these family homes listed another male adult, presumed to be a boarder. One was a labor camp that housed eighteen fishermen. [3]

The labor camp housed eighteen fisherman, with all but three from the Philippines. The fishermen ranged in age from 23 to 95. In this census, "Black" was the designated race of the Manilamen.

In 1893, many of residents of the island of St. Malo and nearby Shell Beach were Filipino, or descendants of Filipinos, but were often referred to as Malays or Manilamen. They were described as Spanish-speaking "mixtures of Malays, negroes, and whites" with "some of the Chinese in them." [4] They were known for being excellent seamen and fishermen. By 1893, many of them had accumulated some wealth supplying fish and oysters to New Orleans. [4]

The storm of 1893 destroyed the homes and the belongings of residents all along the Louisiana coast. The structures on the island of St. Malo were badly damaged by the storm surge. The lake waters rose over all single story buildings and washed everything outside of a structure away. In Shell Beach, buildings were completely destroyed. The storm killed a number of residents, including Filipinos. The survivors were impoverished and distraught over the loss of family and friends. After the storm, many vowed to move inland. [4] 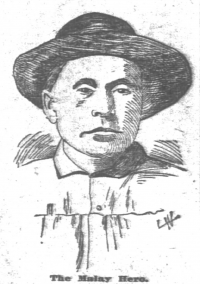 Marshal Marrilino saved the lives of seven Filipino men and a woman, the spouse of one of the men. The story of Marrilino was part of the narrative of death, destruction, and heroism reported by New Orleans' The Daily Picayune on October 6, 1893. Marrilino, a fisherman, owned the only two-story house on the island. He helped rescue the other inhabitants by ferrying them from their rooftops to his house, where they were able to wait out the storm safely. [4]

The storm destroyed Shell Beach which had a large population of Filipinos and Filipino descendants. John Baraido, a Filipino, survived the storm and found the bodies of Lilly and Johnnie Serapino two miles from Shell Beach. [4]