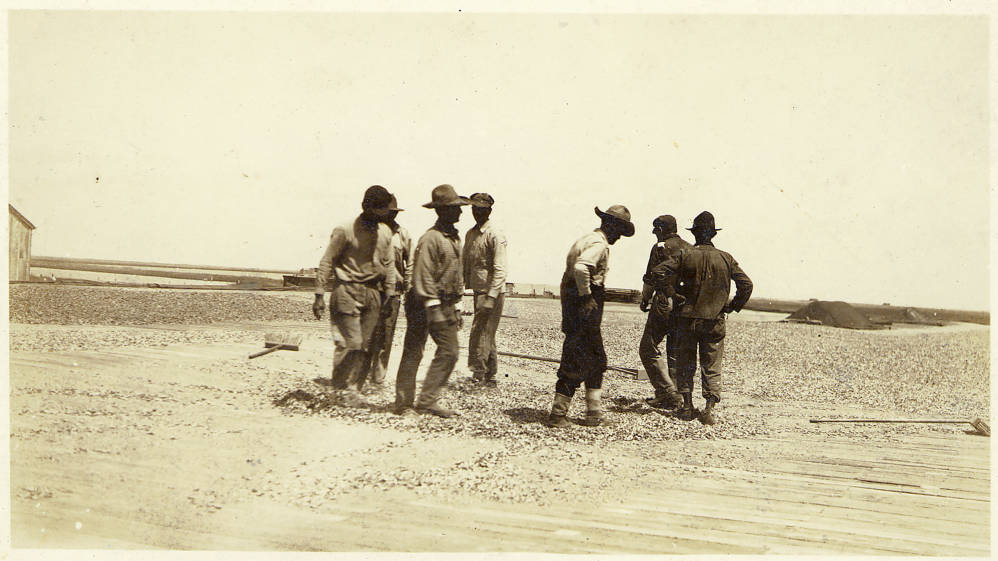 Established in the late 1800’s Manila Village was one of several Filipino shrimp drying facilities in Barataria Bay. Part shrimp processing plant and town, the Manila Village housed workers and their families in cottages around the edges of a large shrimp-drying platform. Skills in net making and fishing, allowed Filipinos to thrive in the industry and helped make Manila Village a symbol of the growing Filipino presence in the region.

The shrimp drying industry supported over 100 platform communities in Barataria Bay. Smaller platforms such as Clark Cheniere, Bayou Cholas, and Bassa-Bassa competed with Manila Village for Filipino workers, but the shrimping business was hard work and required a large pool. At the time shrimp were caught using seine nets. The harvesting process required two boats and a number of men. Men entered the shallow waters near shore to stretch the net along the coast. As the net closed, men in boats dipped long scoop nets into the water to gather the shrimp. Once the boat was full of shrimp, they sailed back to Manila Village or one of the other shrimp drying facilities. At Manila Village, the shrimp were boiled in brine, before being spread along a football-field-sized platform to dry. Once dried, the process called “dancing the shrimp” was employed to remove the dried shell from the flesh of the shrimp. Men would either cover their shoes with canvas or wear special shoes to march on piles of dried shrimp. The stomping action resulted in the dried shell crumbling away from the firm flesh. Filipino workers “dancing the shrimp” is an enduring symbol of the Filipino presence in Louisiana.

By the 1930’s, Manila Village and the shrimp drying industry had reached their peak. Shrimp could be caught with less labor, meaning fewer Filipinos were needed in the industry. Refrigeration and improved canning methods meant the best shrimp were being sold to the fresh market and canning companies. Storms were a constant threat to coastal fishermen. When given the opportunity many Filipinos moved to higher ground. Storms eventually destroyed Manila Village. In 1947, a storm destroyed most of the buildings. In 1965, Hurricane Betsy laid waste to the remaining buildings. Today, only a few pilings remain.

The first Filipino settlers of Louisiana were Filipino sailors, Manilamen, who left their vessels for opportunities on the Gulf Coast. Manilamen may have arrived in the area in the late 18th century when both the Philippines and Louisiana were Spanish colonies. New Orleans was one of the busiest ports in the US through the 19th century and Filipinos were known as accomplished seamen. It’s natural that Filipinos working on vessels sailing the Gulf of Mexico would find their way to Louisiana. Eventually, some decided to settle in the sparsely populated Louisiana wetlands. Their skills as boatmen and fishermen allowed them to make a life for themselves. They established villages on St. Malo Bayou and on coastal islands in Barataria Bay. The success of the early pioneers led to other Filipinos setting sail to Louisiana with the intent of settling in the state.

The dried shrimp industry in Louisiana was founded by Chinese and Filipinos. The industry developed around the availability of shrimp in Barataria Bay, an export market in China, and a willing labor force that included Filipino fishermen. The circumstances led to an industry that supported thousands of seasonal workers who caught and dried shrimp in Barataria Bay. Most of the Louisiana dried shrimp were shipped to China or Chinese markets in the United States. Some were packaged locally to be sold in grocery stores or to be eaten as a snack in bars.

The Philippine Louisiana Historical Society (PLHS) unveiled the Manila Village Historical Marker on June 16, 2012. The event brought out the Filipino community to celebrate the long-awaited event. Descendants of Quintin de la Cruz, the founder of the Manila Village, were on hand for the event. A year later on June 30, 2013, the PLHS unveiled a marker for Clark Cheniere, another Filipino village, and dedicated the space around the markers as Manila Village Plaza.